Create an Account - Increase your productivity, customize your experience, and engage in information you care about.

History of the Library 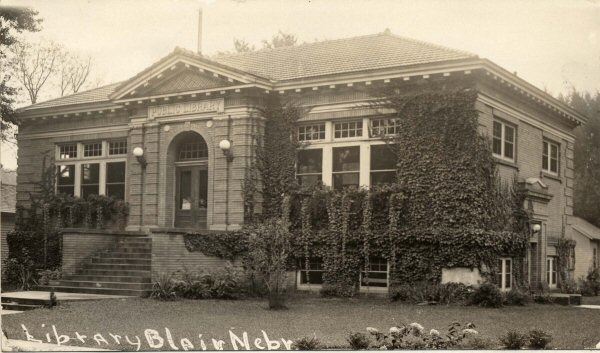 The Blair Public Library traces its roots back to 1877 when a group of Blair women formed the “Ladies Library Association”. Members donated books that included classics, history, travel, and fiction. The first books were kept in private homes. Later the collection was moved to a room in the Pierce Building and Mrs. Carrie Wiseman was hired as the first librarian. She managed a collection of some 300 volumes. The library was open on Saturdays and books were loaned through the purchase of a $1.00 yearly membership or five cents per week. The librarian was paid 50 cents per week and given an annual membership ticket.

In 1915, Miss Edith Schmahling was hired as librarian. The Monday Afternoon Club paid her salary. Her salary was 50 cents per session, which was held three times per week. During the year, discussions were held about establishing a free public library and it was decided to turn the matter over to the city. A city ordinance was passed which made it a free city library and initiated a two-mill levy for its support. The January 1916 monthly report showed a book circulation report of 416, salary paid of $6.15 to the librarian, and expenses of 10 cents.

In 1916 the citizens of Blair voted 227 to 148 to accept a donation of $10,000.00 from Andrew Carnegie. Lots were purchased and the new library building was erected. On October 6, 1916 a special ceremony was held at the library. The ceremony included a flag raising ceremony by the Women’s Relief corps, music by the Blair Band, speeches, and punch served by the domestic science girls. Miss Mae MacQuarrie was hired as librarian in 1916 and served 43 years as librarian until June 1959.

On Monday, July 23, 1973 the library building caught on fire. An electrical fire apparently started between the ceiling of the basement level and the main floor of the building.

The library was dedicated on November 28, 1976. The 6,400-library building was built with a projected growth of 10 years.

After roughly 40 years the library on South 17th Street was replaced in 2017. An increased need for space and access to technology led to the planning of our current building, the Blair Public Library and Technology Center, which opened to the public on April 1, 2017.